The 2021 Ducati Monster is lighter and faster with an all-new look and styling. But is it better?

Bologna would have been warmer, but at the sight of the new Monster, you can forgive Ducati for the short-term relocation of their presentation to Stuttgart, Germany, which is a brisk four degrees celsius. The heart becomes warm. Although maybe not quite as hot as the discussion about the Monster’s new dress – the missing trellis frame obviously divides Monster fans into two camps. But a look at the datasheet will get your heart pumping. It’s a brand-new motorcycle, so let’s skip the nostalgic emotions and hop right on this promising and fun machine!

Compared to its predecessor, the Monster 821, hardly anything has stayed the same with the new Monster. As of 2021, the displacement designation will be removed from the Monster’s name, and we’ll see only one displacement offering. A Desmo-V2, round headlight, and a bison-back-shaped tank – with side knee recesses – all adorn the new Monster. But instead of the iconic trellis frame, it now carries the aluminum frame derived from the Panigale V4, which together with the new swingarm saves 14.3 pounds in weight. The tank shrinks from 4.5 to 3.7 gallons. The rims weigh 3.75 pounds less and with further detail improvements and a 5 pounds lighter engine, the weight saving adds up to a total of 39.6 pounds. The Monster now weighs in at a feather-light 414 pounds wet or 366 pounds dry.

The Desmo-V-Twin found in the Monster is the same 937 cc powerplant that Ducati has been using in both the Hypermotard and Supersport. It sees only small changes to make it suitable for the Monster. Additionally, Ducati’s cult naked bike got a new and extensive electronics package, complete with lean-angle sensitive traction control, lean angle ABS, wheelie control, three riding modes, and a quick-shifter (up and down) as standard. Everything can be adjusted using the familiar Ducati menu on the 4.3-inch color TFT display.

What is immediately noticeable when you first sit down is the new frame not only saves weight but also makes the new Monster slimmer. Your knees rest comfortably on the sides of the tank and the angle of your legs fit right away, giving a feeling of intimate connection to the bike that no longer requires leaning forward towards the handlebars. With the old 821, the ergonomics had most riders stretched more over the tank, due to footpegs that were placed higher and a seat that put the rider in a position that made it difficult to move around. Now, there is a lot of space; you can slide back and forth on the seat as you like. This makes it easier to find a comfortable position on longer tours. The same is true for your passenger, who also has a good amount of space, especially to the rear of the pillion seat where a generous amount of cushion can be found with a comfortable knee angle to the passenger pegs.

Even though the new Monster’s seat rose from 30.9 inches to 32.3 inches, the narrow transition from the seat to the tank enables me, measuring 5’6”, to stand securely. For even smaller riders there’s a lower seat available and together with the lowering kit, you could even get it as low as 30.5 inches.

When starting the engine for the first time, the Monster sounds conspicuously inconspicuous, almost shy. Probably due to the strict regulations in Europe.

Outside the traffic in Stuttgart however, the Ducati loses all pretense of shyness. At higher speeds, it really wakes up and emits a pleasantly bassy sound, at a socially acceptable volume for the environment of course. The 111 hp (82 kW) Testastretta is not only acoustically well behaved. 9.5 kg / 69 lb-ft of torque at 6,500 rpm push you nicely out of the corners. The jerking low-speed throttle response, found on previous Monster iterations, has been significantly smoothed out, which allows more relaxed cruising. The Desmo-V2 powerplant especially likes higher speeds and pulls strongly through the speed range from the lower center.

The “Sport” mode with very direct throttle response is good for an ambitious pace. “Touring” makes the latter tamer and “Urban” also reduces the peak power to 75 hp. On open and dry country roads, the decision to put the bike in “Sport” is an easy one. And since switching between the riding modes is still rather cumbersome in the menu, you’ll find yourself keeping it in Sport mode most of the time. It is a pleasure to shift up and down through the gears with the gentle quick-shifter. The easy-to-use hydraulic clutch is only needed to start up, but it’s still nice that the clutch lever, as well as the brake lever, can be adjusted in width.

While the V2 is buzzing lively under you, the first corners fly by without you having to think about it. The Monster faithfully follows the line, easily allows for corrections, and always remains precisely predictable. Among other things, because of the shorter wheelbase, it is more manageable than its predecessor, and it falls quickly into an inclined position.

Another thing that I noticed right away: the better steering angle. It has changed by seven degrees and especially at press rides like this one where you have to do one U-turn after another for photo and video runs, I really do appreciate that.

The suspension, which is not adjustable with the exception of the spring preload, does a good job and shows no weaknesses on this first trip – as does the Brembo brake system with radial calipers and 320-millimeter discs.

The new Monster is available in three different colors, Ducati Red with black wheels from $11,895. Aviator Grey with red wheels and Dark Stealth with black wheels from $12,095. For an additional $300 you can upgrade your Monster with a “+”. The Monster + comes with a small fly screen plus a passenger seat cover. Other colors and decors are of course also available, as well as two accessory exhaust systems by Termignoni.

What else? The service intervals are pleasantly long, as is now customary. The first oil service is due after 9,000 miles, the valve clearance check is only needed after 18,000 miles. In between, there is a lot of time to enjoy the new Monster without interruptions.

So, it happens that the much too cold test ride somehow ends much too early. I would have accepted the shivering a little longer for more seat time. The new Ducati Monster is not chained to the past but looks straight to the future. It is lighter, more dynamic, and, compared to the Monster 821, stronger. Anyone who appreciates these qualities will find the new Monster a great option for everyday riding. And for the nostalgic fans of Ducati Monsters’ past, they can at least still buy one of the previous Trellis-Monsters this year as some remaining Monster 1200 models are still being sold. 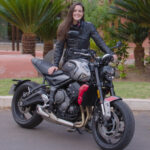