Ask any racer, any real racer, and they’ll tell you there’s absolutely nothing like getting your bike on a rail, gliding through a turn at full lean and throttle pinned. But how do us mere mortals do such a thing!? Ask professional motorcycle tuner Bobby Loo and he’s got one word for you: suspension.

Often a component on the bike most novice riders forget about and leave untouched. But avid track junkies can’t do without full aftermarket. Good customizable forks and shocks are an absolute necessity when we talk about cornering a sportbike and building confidence.

As Bobby describes it, “We all want our bikes to handle a certain way. It’s about being more comfortable and confident and feel is confidence.” Bobby believes that getting suspension dialed in is the cheapest, quickest, and best upgrade to a sportbike, so it only makes sense to take a harder look at how your bike’s suspension is currently set up.

But what does suspension do anyway? In short it keeps the bike’s tires in contact with the road. And that’s so imperative on the streets when a contact patch no larger than a credit card is what’s keeping you and your bike right side up as you maneuver around cars, debris, and all the other crazy unknowns that come with street riding.

But do street riders really need to customize their motorcycle suspension if they are just casually cruising? According to Bobby, yes they do! “Most [riders] are afraid to turn the clickers, or think they don’t need it, but when you find a happy medium you’ll see even with casual street riding you’ll feel that the bike wants to steer for you and just feels more stable.”

There’s nothing to be fearful of. Bobby’s perspective is that “back in the day, the suspension was a little bit to be scared of because if you went too far one way or the other, the forks would not move. The shock would not move. But nowadays they set it up so there’s a smaller range to work with that way you don’t hurt yourself.”

These adjustments equal a greater margin for error when you’re testing different setups and really pushing the suspension. When we talk about pushing a bike, we’re really talking about getting the suspension working.

Heavy braking, hard acceleration, and of course as much lean as we can get away with… All these things require front and rear suspension to work in harmony. This is, after all, a precision sport, where millimeters, plus or minus, can change the entire geometry of a bike and the way the bike handles.

From my personal experience, I know the struggles that come from the bike not feeling right, and the toll it can take on a racers mental game. The self-doubt, lack of trust in the bike, and confidence to push the bike are all negative aspects I have struggled with in my track riding years. And the only thing that has helped me overcome those demons and set my own personal best laps times has been working one on one with a suspension tuner and turning some clickers.

But when is it too much?

That’s when Bobby recommends, “if you feel like you’re not making much improvement when you’re clicking the dials, then step back, reassess if it’s you and not the bike. How is it working everywhere, not just in 1 or 2 corners.”

And this advice rings very true. Bikes don’t have issues in 1 turn. They will have the same issue in every turn. It’s the rider’s inputs into the bike that cause it to be unsettled in 1 or 2 turns.

I know after my most recent right-sided low side that I was unintentionally putting a secondary input into the handlebars when I was heading into a right turn causing the bike to become unsettled. It wasn’t until I had a suspension tuner follow me around the track that I was called out on it and was able to correct it.

So the moral of the story is… Motorcycle suspension does matter.

Bobby’s best advice to new riders is, “Just go for it. Find a tuner. It’s nothing to be afraid of. And it’s definitely nice to have 1 on 1 time with a tuner to really get the bike where you want it. And if you’re just a street rider, remember to service your suspension because you’re suspension changes as the fork oil degrades, etc.”

The best way to gain (or lose) confidence in your motorcyle is through the suspension. So push those fears aside. Turn some clickers. Then grip it and rip it! 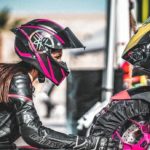