In the 1980s, Sardinia was the first terrain outside of the African continent to host a rally, that used the Paris-Dakar formula. Deus recreated the rally with Renato Zocchi, who created the first one in 1984 with a hint of swank – the Deus Rally di Sardegna!

The Deus Rally di Sardegna started on May 18th at Monza. From then on, everyone headed to the port of Genova where we loaded up the bikes, our badass Fiat Panda and took on the sea. I’ve been on nothing bigger than a yacht, so when we pulled up to the port, I was confused on why the Italian’s called this massive ship a “ferry.” It was by far not the ferry we take to Fisher Island in Miami. Once we boarded, it was, well, quite an experience! I felt as if I was boarding the Titanic with Italian gear heads. Everyone was trailing around in their boots dropping dirt everywhere, along with their sweaty gear. My friend Vicki and I traveled from America, for a two-week vacation, so we had four heavy bags, in total, wheeling them around trying to figure out where we even go to find our room.

As we entered our room, we threw in our bags and headed to the bar. This is when the party officially started: two women on a boat with many, many beautiful Italian men. We all stayed up eating, drinking, creating great conversations, and wrestling. Yeah, you heard right, wrestling. Of course, someone brought a Luchador mask. That is where it all started. It had to have been midnight, and there were no children in the enclosed play area. So what do a ton of grown men do? Invade the giant playpen, wrestling around while everyone laughs, chants and of course, takes videos. Finally, people started falling like leaves, and we all went to bed.

As we’re sleeping in a room the size of a closet, the intercom comes on with a loud Italian woman shouting to go eat breakfast and get ready since we will be arriving at the port very soon. We all got off the ferry and got suited up. We helped the guys get their maps altogether and jumped in the Panda.

Days of driving around Sardinia in mostly rain, which was very uncommon for the time of the year, was quite a time. One day it was terrible weather, and we decided to follow a photographer to a good spot to see them ride through a deep body of water. I was in white Nike’s, nice ripped jeans, a pullover, and jean jacket. We started walking the trail and ended up having to climb up a massive hill to get to where we needed to be. Once I began to climb the rocks, some began to get worried. As the guys and I climbed the hill, we had to go around and back down, pushing our bodies through thick bushes, jumping ponds and climbing through barbwire fences. Once we did all that, we finally made it to the spot. Set up camp and waited. After about two hours it started getting colder, so one of the guys made a fire, which helped until it rained.

As more time went by, we started to hear motorcycles finally. We all got the cameras ready and waited. Few came at a time, taking different ways through the water. Some came flying through spraying a massive amount of water into the air, and some going slowly. It started to get fun, for those watching once people started getting stuck and face planting into the water, which created such great content. After a few hours of watching them go by, we hiked back to the car, had a beer, and headed back on the roads.

At night we would all meet back at the hotel, wash off the blood, and start drinking once again. One of the next days we did some more off-roading and ended up at an MX track, which was a great time. Our last night we stayed at this beautiful hotel where we all again, ate, drank, and talked motorcycles. Towards the end of the night, the guys decided to get a little sentimental and start crowding the piano, singing and enjoying the time we all had together. The next morning was the most beautiful of the days. Sunny, warm and not a cloud in the sky. We all headed back to the port for another party on the boat.

That night we realized the trip was over and we would all be going our separate ways. We all chose a comfy spot, drank, and just shared more and more stories. Looking back, I came with such great friends and left with new ones. Getting to meet so many different types of people who all share one passion is remarkable. From Olympic athletes to photographers, to fashion moguls and then, well just two American women flying to Italy to drive our friend’s Fiat Panda that he drove in the Mongol Rally. This trip was another one for the books, and I am so ever thankful to attend these events. Hopefully next time I will be able to get a motorcycle! Until next year!

Check out the Deus Rally di Sardegna for all their upcoming events so you can enjoy them as much as I did and plan to, once again. 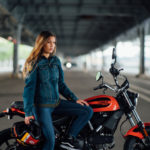