As different as night is from day, riding a cruiser may be from riding a sportbike but both offer an unmatched enjoyment to the rider.

Boys and girls, I know this is SportBikes Inc. Magazine but I want to deviate from the normal curriculum today and talk about something a little different. Many people I know through the two-wheeled community know that I have wanted to get a cruiser lately and I have talked about it often but what many might not know is that I got my two-wheel start on a cruiser. I haven’t ridden my cruiser since 2006, but I have wanted to get back on one for quite some time now. In my effort to find the right cruiser for me and to get reacquainted with cruising, I have spent several hundred miles in the saddle of a cruiser over the past couple of weeks. I’m not sure how many cruiser riders have ever spent time in the saddle of a sportbike, but I would imagine that most sportbike riders who have gotten behind the bars of a cruiser will agree with me when I say there’s something very relaxing about riding a cruiser. What a difference! That different feeling I got from riding a cruiser was immediate and obvious. There was a very real and not just perceived alleviation of the kind of pressure I feel when atop my sportbike. Perhaps it’s the knowledge that this motorcycle cannot accelerate as quickly as my other motorcycle or perhaps it’s the more upright riding posture offered by a cruiser, but there is definitely more enjoyment riding at low to moderate speeds on a cruiser than I experience on my sportbike. Come to think of it, due to the engine noise and lack of a windscreen, I submit that it’s more fun to ride a cruiser at low to moderate speeds than it is to crack triple digits. As different as night is from day, riding a cruiser may be from riding a sportbike but both offer an unmatched enjoyment to the rider.

From mile one to the last mile on the loaner cruiser, who I named “Miss Right Now,” I had the pleasure of putting thru its paces was fun, relaxing and unexpectedly gave me that new rider feeling that I haven’t felt in many, many years. It took me much less time to get comfortable with the bike and its different riding posture; forward controls feel so alien to someone used to rearsets, and the throttle response of that loud rumbling v-twin engine. I discovered that despite the motorcycle’s loud exhaust system, deafening air-cooled growl and intimidating presence one takes on when riding a loud cruiser, riding one is much less aggressive than riding a sportbike.

When I ride a sportbike, I feel compelled to ride much faster than necessary to get from where I am to where I want to be. When riding a sportbike, I feel the need to be nimble and maneuverable as a self-preservation technique and defensive measure. When I ride a sportbike, I delight in exaggerated lane changes, severe lean angles when turning and speedy acceleration from a dead stop. None of these things are the case when I ride a cruiser. There’s no pressure to perform to the motorcycle’s capability or satisfy the bike’s race origins. There’s no concern for the loss of stability or control at low speeds like when on a sportbike. When riding the cruiser that elusive “wave” from the cruiser crowd was all of a sudden offered up by everyone on a bagger whose path I crossed. “The wave,” if you are a motorcyclist you should know what “the wave” is, is rarely offered from those on cruisers to those of us on sportbikes.

One of my recent rides on a cruiser was with a group of eight and in the group was a combination of sportbikes, cruisers, and touring bikes. After that ride, I really don’t understand why cruiser and sportbike riders don’t intermingle more. There’s this invisible line drawn in the sand that keeps the two types of motorcyclists from enjoying the company of one another on the road, but really there is no good reason that there should be a “them” versus “us” mentality. Sure, there are many differences between the two types of rides and riders, and the type of attention one receives when riding a cruiser is very different than that of a sportbike rider, but again these are superficial reasons to segregate as a motorcycle community. If it has two wheels, then I am a fan of it, and I am eager to reacquaint myself with the cruiser.

I don’t know if the nautical vacation was named after the style of motorcycle or if the motorcycle class was named after the vacation, but cruisers are appropriately named. It really has been like a motorcycle vacation throwing a leg over this thing. I literally lean back and take it slow. I am less worried that some two-wheel injury will befall me or that I will be run off the road by some slovenly motorist in a cage. I am content to watch cars, and other motorcyclists blast by me as I pleasantly putter along, often riding the speed limit or slightly under it. I am reassured by the notion that I am both easier to hear and easier to see when I ride a cruiser than I am when on my sportbike. For all these reasons and more, I definitely want another cruiser. Now let me be clear (in my Presidential voice), my desire to get another cruiser is in no way a declaration that I will be hanging up my full-face helmet for a beanie style lid or trading in my favorite Sidi boots for a pair of chaps and fingerless leather gloves. No. No. No. I just believe that despite the availability of performance cruisers and sporty standard motorcycles out there like the Yamaha Vmax, Triumph Speed Triple, Suzuki Boulevard M109 or Ducati Diavel, the only way to truly have the best of both worlds is to dwell in both worlds. There’s no one tool to fix it all. If you want a leisurely cruise, then get yourself a cruiser and if you want race replica performance, get yourself a sportbike, simple and plain. I want to ride in both worlds. I want the exhilaration of the race and the leisure of the cruise.

I’m still narrowing down my choice in a new cruiser and have not yet found the right one for me. But I am preparing for my vacation by going on demo rides, researching different models and enjoying this ride until it’s time to strap on the protective gear and gauntlets once again to go out for a blast. 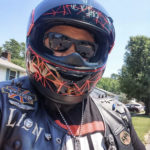