In Memoriam – An interview with famed MotoGP photographer and friend, Andrew Wheeler that was originally published in the December 2014 issue of SportBikes Inc Magazine.

While attending MotoGP at Circuit of the America’s last year I had the privilege of chatting with Mr. Andrew Wheeler; arguably one of the top motorcycle racing photographers to date. Having a personal vested interest in photography and motorcycles myself, I was extremely eager and excited to speak with Andrew.

There are plenty of good photographers out there, people that can capture the motorcycle in action and get “the required shot”. However, Andrew’s photography has something more to it, his shots take on a personality, a soul and are something you can read into. Andrew told me that you shouldn’t have to explain your shot, and it certainly shows. His shots possess a sense of emotion, action, and humanity. He’s very observant and quick whited, not to mention laid back and quite comical, all of which made me just want to engross myself in his stories. I think saying Andrew’s photos have a personality as colorful as the man himself is pretty accurate.

Because Andrew Wheeler takes such passionate photos of riders and their machines, I had to know if there was a passion he himself felt for the metal beasts. And to my surprise, it turns out that the man himself was actually almost born on a motorcycle! Andrew’s parents both rode and met on motorcycles. Later on, when his mother went into labor she was driven to the hospital on the back of a BSA Bantam. It would seem that fate had bestowed the love of motorcycling upon this human. Since motorcycles were always around in his family, Andrew started riding around the age of 11. Living in the United Kingdom, Andrew commuted daily on his motorcycle and even taught classes on how to ride. Since then he’s owned 7 motorcycles and has had numerous accidents, all not so pleasant and one which he was hospitalized for.

“I spent from June 22, 1977, through to March 3, 1978, in the hospital. The first three months of that were in ICU, where I went from being nearly dead to nearly losing both legs, then losing only one leg until they plated everything. I was in pelvic traction for at least 4 months as well.”

I think Andrew’s understanding of riding after so many years and experiencing the dangers of a motorcycle has given him an unspoken appreciation and respect for this two-wheeled machine. I believe that it’s this deep understanding that lets Andrew capture so many rare and beautiful moments.

Andrew has been shooting MotoGP since 2010, so I asked him how he keeps it interesting as it must be hard to come back to the same track and try to get “new” and creative shots.

“I try not to go to the same corners, or if I do, I try to do something other than what I have done before. Ultimately I will not bother at all, and force myself to dig deep and find another location to shoot from,” Andrew replied.

With that said, there are requirements. Andrew points out that there are shots he needs to obtain and do so first, in case any unforeseen accident happens. He has a plan and a strict regime he sticks to.

“One rule I always adhere to is my 10 minute rule. Which is, when everything starts, I start a stopwatch, and when 10 minutes are up, I walk or go to a new spot regardless of what I have. It’s essential to keep the discipline as it works. People ask me how do I feel if I miss a shot, and I usually say that it’s hard to miss a shot if you weren’t there. Better to have a new viewpoint than completely bore yourself mindless in one place.”

The Key thing Andrew told me was to always remember to be happy with what you do. Sure there are expectations, but you shouldn’t let them completely control what and how you shoot. At the end of each session, Andrew takes the time to shoot what his heart desires.

While Andrew may not have a set shot in mind, there are some details that he always pays attention to. Weather is a big factor. Also, every track has its own challenges and personality, but Andrew doesn’t seem to focus on the negative. Instead, he is able to take a track’s uniqueness and expose its beauty. For example, some of my favorite shots are from Qatar’s nighttime races. Shooting at night already poses its own challenges, however, Andrew seems to use them to his advantage. He uses a low shutter speed, the lack of landscape, and the gleam of floodlights in the distance to his advantage. In turn, it creates a very unique racing shot as races usually take place in the daytime.

Another aspect Andrew focuses on is how the rider interacts with his machine. He says that, unlike photographing cars, motorcycle racing has a very humanistic quality because you do in fact see the bond between rider and machine. I think that Andrew’s past history of photographing horses may have had some influence. Perhaps shooting a graceful horse and a motorcycle is very similar in the aspect that there is a visible living and breathing being involved.

And lastly, Andrew always keeps a watchful and observant eye on what’s happening. He shoots everything from the motorcycles to the environment, to the animals and people that create the amazing atmosphere at the MotoGP tracks and garages. Nothing is off limits and you never know when an opportunity for a brilliant shot may arise. When you look at his vast collection of photos you most certainly get a sense of involvement and a story. His shots are like a painting where anyone can get lost and daydream. I believe that this is what makes a great capture, when the viewer can put themselves within the image and feel the excitement. That is true engagement through a photographer’s eye. I asked Andrew what he personally looks for in a shot that makes him feel satisfied…

“If it has told a story. For me, I like to feel I can allow the viewer to step into the image and see things. I try to leave a weekend with at least one shot that says to me, “that was the weekend at insert race track name here.” – Andrew Wheeler 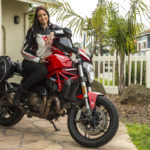