Do aftermarket rearsets really make a difference when compared to stock footrests? First published in the October 2016 issue of SportBikes Inc Magazine.

For many of us, riding the racetrack is a passion that’s difficult to describe to those who are uninitiated. The drive to improve both our machines and our individual skill sets is a common thread that ties together riders of all ages, experiences and backgrounds. Track day riders and racers devote considerable time, energy and resources to our sport. Many of the ideas for these articles come from people who ask questions that boil down to “what’s next” with respect to either solving a problem on the track or when considering their next purchase. We’ve all got finite resources (both in terms of time and money) and want to spend what we’ve got wisely. This month our esteemed editor posed a question with respect to aftermarket rearsets.

This is a common upgrade for both track day riders and racers, and Mr. Allan Lane wanted to know “Do they really make a difference over stock parts?” A good set of aftermarket rearsets will often cost anywhere from $400 to $600, so this is certainly a question worth considering.

I’d like to answer this question in three parts. First, there are certain features common to almost every OEM rearset (regardless of make, model or ergonomics) that should be considered. We’ll talk about the universal pros and cons of OEM versus aftermarket rearsets. Second, there are several key traits that are unique to each motorcycle, and these should be addressed on a bike-by-bike basis. We’ll look at the top three factors to consider and how they affect your bike ergonomically. Third, if you’ve decided to purchase rearsets there are some basic questions that you want to ask in order to select the best brand for you.

If we disregard actual footpeg position as a factor on stock rearsets for the moment, there are two major functional differences that I feel are very important between OEM and aftermarket units. These factors apply to nearly every OEM rearset I have ever ridden on.

First and foremost, stock footpegs fold. The primary thought here is that if the OEM pegs, which are often low to the ground, drag on the asphalt (or a curb, or any other immovable object) the folding peg will reduce the effect of the hit on the chassis and reduce the likelihood of a crash. Fair enough. What disadvantages are there for a folding peg? First, once a rider gains track experience, the advantage of using your feet, ankles and legs to move around on the bike becomes quickly apparent. As riders begin to turn with greater precision (and speed) the force required on the pegs becomes many times greater than what is used on the street. Fast riders will often inadvertently cause the pegs to fold up during transitions, which is a major distraction.

The other factor with pegs that fold comes with respect to the protection of the motorcycle. Rearsets are an important part of the protection package when used in conjunction with other parts. There is a debate among riders these days whether frame sliders are a good idea or not. I’m personally a fan of them, but only if they do not stick out too much (they’re “frame sliders” not “bodywork protectors”). When good frame sliders are combined with solid mount footpegs, the two-point sliding system does a great job to protect important parts like frames, exhaust and especially engine covers. A well-made rearset will make it much more likely that your bike does not lose its oil in a fall or ingest dirt into your engine. You are far more likely to be able to ride home in a street incident or finish your track day.

In addition, 99% of the stock pegs out there do not have very good grip. Some motorcycles (which shall remain nameless) come with pegs that are downright slippery. Having a set of rearsets with a grippy surface will allow riders to use their legs as they should and keep solid footing on the bike.

Next, we will consider a factor that varies widely for each rider and motorcycle combination – ergonomics. Most older bikes had pretty severe ground clearance issues. Today, manufacturers are doing much better on some models but there are frequently still some improvements that are needed. The three factors we will consider are ground clearance, ease of movement on the bike, and the ability to “lock in”.

If you plan to ride on the track with good rubber, most pegs will still drag on the ground. It doesn’t take too many sessions to wear through the toe sliders on a $400 set of boots, and the sound of scraping pegs is unsettling for many riders. For these reasons alone, 90% of the bikes out there will benefit from rearsets. Next, the ideal position for a rider who wants to be able to move side to side quickly is an athletic position similar to playing shortstop. The balls of your feet should be directly underneath you when you are midway down the seat. Many bikes have the footpegs further forward than ideal for “spirited” to reduce the knee “angle” and increase comfort on long rides. For this reason, many rearset manufacturers will move the pegs back in order to facilitate rider movement. Finally, the most important connection for riders as they learn proper body position is the outside knee firmly planted against the tank. Since the knee area of the tank is typically 8 to 12 inches tall, this leaves room for a pretty wide range of riders to anchor in. However, if your pegs are low and/or your legs are short, you may find making this connection difficult and as a result, will want to raise the pegs.

If after evaluation you find your pegs dragging on the ground, your feet a little forward of your torso, or your outside knee slightly separated from the tank then rearsets are going to be a valuable investment for you. Spending a few minutes with an experienced coach can often provide valuable insight and feedback. You can also look at photos from your sessions and look for both those “shortstop” ergonomics and that critical outer knee connection (which should be firmly against the tank – not pointing up to outer space).

After considering the protection, grip and ergonomic advantages many track day riders and a vast majority of racers opt to put rearsets on their bikes. With this in mind, what are a few factors to consider? In addition to the things everyone starts with (looks and pricing), there are a few other factors to consider.

First, are there readily available and reasonably priced spares available? Often, rearsets made domestically are cheaper, faster and easier to fix. You also may find someone with spares at the track. Second, how much adjustability do need? If you are in the middle 80% of people, any good rearset manufacturer will put the pegs where they need to be. Large ranges of adjustability make for greater expense and often less durable parts (more holes = more breaking points). While fine-tuning is nice, but if you are between 5’6” and 6’3”, you should be able to find what you need within about a ½” of adjustment. (Hint: for tall riders who still need ground clearance, there is a huge difference in comfort found by adding a little seat height. You’ll be amazed what 15-20mm can do). Finally, do the parts have a reputation for durability? When you’ve spent thousands of dollars preparing a bike, taken time off of work and paid entry/track day fees, be sure that you’re bolting something on that is designed to give you a chance to get back out on the track after a minor incident. 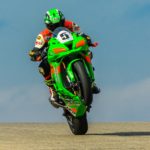 It’s about to get As Hot As Hell on the street.

The SBI Feed: BMW R18 B and Transcontinental - Fir

The futuristic Moto Guzzi V1000 Mandello made its